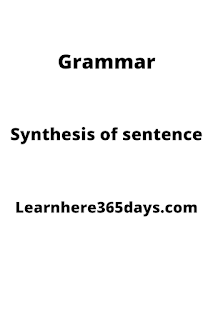 Synthesis: synthesis is the opposite word of analysis that means the combination of two or more simple sentences into one new sentence, simple compound or complex sentence

Follow is the way of a simple sentence into one simple sentence
1 using a particle
Andrew jumped up. He ran away
Jumping up, Andrew ran away
Smith was tired of play; he sat down to rest
Being tired of play, Smith sat down to rest
2 using a noun or a phrase
This is my friend Watson. His name is Watson
This is my friend Watson
I spent two days in grade town; it is one of the most attractive spots in Lahore Pakistan
I spent two days in garden town, one of the most beautiful spots in Lahore Pakistan
3 using a preposition with a noun or gerund
The sun rose their journey was not started
The sun rose before the start of their journey
Joe had failed many times he still hopes to succeed
In spite of many time failures, Joe hopes to be succeed
Her husband died. Aliya heard the news she fainted
On hearing the news of her business loss, Aliya fainted
4 using the nominative absolute construction
The soldiers arrived, the police  the crowd disappeared
The soldiers having arrived, the mob dispersed
5 using an infinitive
We have some duties we must perform.
We have some duties to perform
Raj wanted to educate his son he sent him to Europe
Raj sent his son to Europe to be educated
Kumar is very fat; he cannot run
Kumar is too fat to run
6 using an adverb or adverbial phrase
Ali deserved to succeed; he failed
Ali failed undeservedly
The sunrise, the boys, had not started the game
The boys had not started the game by sunrise
Combination of two or more simple sentences in a single compound sentence
Simple sentences can be combined to form a compound sentence by the use of coordinate conjunction, and there are four kinds of coordinate conjunction cumulative adversative alternative and illative
Cumulative
Conjunctions that usually add one statement to another are called cumulative.
Andrew is a fool Andrew is a knave
Andrew is a fool and a knave
[Or] Andrew is both a fool and a knave
[Or] Andrew is not only a fool but also a knave
[Or] Andrew is a fool as well as a knave
It is noticed that conjunction and simply adds one
statement to another
The conjunction used above, like both not only but also as well ass are emphatic forms of and do the same work.
Conjunction that usually expresses contrast or opposition between two statements is called Adversative.
Anwar is slow. he is sure
Anwar is slow, but he is sure
Babar was Annoyed. he kept quiet
Babar was annoyed yet ( or still) he kept quiet
Smith was alright. He was fatigued
Smith was all right; only he was fatigued
You can notice that the conjunctions used above (but still yet nevertheless however express the opposition or contrast between the sentence.
Conjunctions that express a choice between two different alternatives are called alternative
Study hard; you will be fail
Study hard, or you will be fail
Come in, Go out
Come in or go out
[Or] either come in or go out
You can notice that the conjunctions used in the above sentence ( either neither nor )expressed the choice among two alternatives.
Conjunction that expresses the reasoning are called illative
Ahmed was obstinate. He was punished
Ahmed was obstinate therefore, he was punished
He can not see it is very dark
He cannot see for it is very dark
It is raining heavily you should take an umbrella with you
It is raining heavily so you should take an umbrella with you
You can notice that the conjunctions( therefore for so etc.) used In the above sentence express the reasoning from the other
Combination of two or more simple sentences to a single complex sentence
1 when a subordinate clause is  a noun clause
Ahmed will be late that is certain
It is certain that Ahmed will be late
Anwar is short-sighted; otherwise, he is fit for the post
Except that Anwar is short-sighted, he is appropriate for the post
The examples that are given above the subordinate clause is a noun clause
2 When subordinate clause is an Adjective
Aliya keeps her ornament in a safe this is a safe
This is safe where Aliya keeps her ornament
A fox met lion the fox had never seen a lion before
A fox who had never seen a lion before met him
The examples that are given above is the adjective clause
3 when a subordinate clause is an adverb
ZA Bhutto died in 1989. Benazir Bhutto became prime minister
When ZA Bhutto died in 1989, Benazir Bhutto became prime minister
I waited for my brother. I waited till his arrival
I waited for my brother until he came
The example is given above is the adverb clause of the subordinate.
so that is all about synthesis of sentences if you any doubt question or suggestion you may contact us in comment section