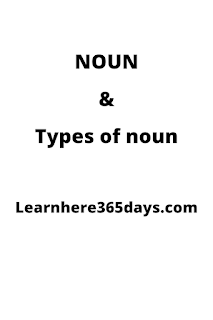 what is Noun and its types

Below we have described the complete detail of nouns and their kinds with proper examples.

The Noun is the name of everything in this world. Everything has been named as its identity. It can be a person, place or things name

Common Noun refers to the common name of a person’s place or thing; for example, school girl city school is the common just like girl and city.

Proper Noun is the specific name of a person, place, or thing. For example, Ahmed Saint Theresa school Karachi are specific boy school and city names.

: Collective Noun is used to show the name of a collection or number of a person place or things that are together and spoken as a whole or one

Honesty from honesty, kindness from the kind

Slavery from slave childhood from a child

countable Noun are the names of people; please object that we can easily count