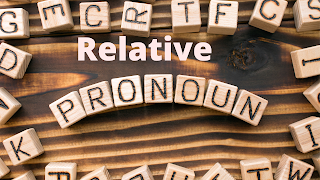 1) Who, whom, whose, etc. (pronouns that stand before a noun)

2) Whose, whom, whose, etc. (pronouns that stand after a noun)

3) Which, that, this, etc. (pronouns that stand after a noun)

To understand the concept of relative pronouns, read the following pairs of sentences carefully

Here is the watch you lent me

Let’s combine each of the above sentences

I met ALI, who had just returned

I have found the pencil which I lost

Here is the watch you lent me

The word which joins or connects two statements. It, therefore, does the work of a Conjunction.

It is, however, called a Relative Pronoun because it refers to or relates (for example, carries us.

back) to some noun going before (here, the noun Ali), which is called it’s Antecedent

What is the Antecedent of which in the second sentence?

What is the Antecedent of that in the third sentence?

FORMS OF THE RELATIVE PRONOUNS

The Relative Pronoun has different forms for Accusative and Genitive.

This is the boy (or girl) who works hard.

This is the boy (or girl) whose exercise is done well.

This is the boy (or git) whom/who all praise.

These are the boys (or girls) who work hard.

These are the boys (or gins) whose exercises are done well.

These are the boys (or girls) whom/who all praise.

It will be noticed that the forms are the same for singular and plural, masculine and feminine.

The Relative Pronoun has the same form for the Nominative and Accusative cases.

This is the house which belongs to my uncle.

The Relative Pronoun which has no Genitive Case, but whose is used as a substitute for of which; as

A triangle whose three sides are equal is called an equilateral triangle.

The Relative Pronoun that has the same form in the Singular and Plural, and in the Nominative and Accusative. It has no Genitive case.

They that touch pitch will be defiled.

The Relative Pronoun what is used only in the Singular and has the same form in the Nominative and Accusative.

What has happened is not clear.

I say what I mean

He failed in what he attempted.

USE OF THE RELATIVE PRONOUNS

As a general rule, who is used for persons only, it may refer to a Singular or a Plural Noun.

The man who is honest is trusted

Blessed is he who has found his work

He prayeth best who loveth best.

He who hesitates is lost.

They never fail who die in a great cause.

They are slaves who dare not be

in the right with two or three

Who is sometimes used in referring to animals. Whose (the Possessive form of who) is used in speaking of persons, animals, and also without life as,

The sun, whose rays give life to the earth, is regarded by some people as a god.

This is the question whose solution has baffled philosophers of all ages.

More properly. This is the question the solution of which has baffled philosophers of all ages.

Which is used for things without life and for animals. It may refer to a Singular or Plural Noun.

The moment which is lost is lost forever.

The books which help you most are those which make you think most.

The horse which one recently bought is an Arab

Which was formerly used to refer to persons; as,

Our Father, which art in heaven.

Which may also refer to a sentence; as,

The man was said to be drunk, which was not the case.

He said he saw me there, which was a lie.

He is here, which is fortunate.

Note-The relative pronouns who and which can be used

1 To restrict, limit, or define more clearly the Antecedent; that is, where the clause introduced by a relative pronoun is restrictive or non-defining; as

The book which you see on the table cost me ninety rupees.

(2) To give some additional information about the Antecedent; that is, where the clause introduced by a relative pronoun is continuative or defined as,

The teacher sent for the boy, who (= and he) came at once

Note that non-defining clauses are separated from the main clause by commas. Com pare:

My brother, who is a doctor, has gone to America.

My brother, who is a doctor, has gone to America.

That is used for persons and things. It may refer to a Singular or Plural Noun.

That has no genitive case, and it is never used with a preposition preceding.

This is the boy that I told you of

I know the house that he lives in

Uneasy lies the head that wears a crown.

I have lost the watch that you gave me.

Thrice is he armed that hath his quarrel just.

A city that is set on a hill cannot be hidden.

He that is not with me is against me.

Happy is the man that findeth wisdom.

He that is slow to anger is better than the mighty.

The crowd that gathered cheered him to the echo.

It will be noticed that the relative pronoun is used only in defining clauses, for example, clauses that restrict, limit, or define the Antecedent.

That may be used an adverbial accusative =on which, in which, at which as

I remember the day he came

On the day that thou eatest thou shalt surely die

As the Relative Pronoun that has a restrictive force, it sometimes becomes unsuitable as the substitute for who or which. Thus I cannot say

My Father that is a schoolmaster, is fifty years old.

My Father, who is a schoolmaster fifty years old

But if I happen to have more than one sister, I can say

My sister, that has been adopted by my uncle, is ill

(1) After Adjectives in the Superlative Degree, as

He was the most eloquent speaker that I had ever heard.

The wise man that ever lived made mistakes

This is the best that we can do.

All is not gold that glitters.

He is the same man that he has been

it is only donkeys that tray

It was not for nothing mat he studied philosophy.

Man is the only animal that can talk.

(3) After the Interrogative Pronouns who, what; as,

Who mat saw her did not pity her?

Who am I that I should object?

What is mat troubles you so much?

What is there that I do not know?

(4) After two antecedents, one denoting a person and the other denoting an animal or a thing; as

The boy and his dog that had trespassed on the premises were turned out.

What refers to things only. It is used without an antecedent expressed and is equivalent to that which (or the thing which)

What (=that which) cannot be cured must be endured.

I say what is (=that which) I mean

I mean, what say

What is done cannot be undone.

What man has done, man can do

What is one man’s meat is another man’s poison

Give careful heed to what I say.

He found what he was looking for

It will be noticed that what is used in the Nominative and Accusative singular only.

In older English, the word as was used as a relative pronoun after such, as,

Tears such as angels weep burst forth.

These mangoes are not such as I bought yesterday.

He is such a man as I honor.

We have never had such a time as the present.

His answer was such as I expected him to give

The word as can be used as a relative pronoun after same, as

My trouble is the same as yours

This is not the same as that

(But) I played with the same bat that you did

The same as usually means of the same kind.

The same that means ‘one and the same

I collected as many specimens as I could find

[Note-The first as is here an Adverb.]

There is no man but wishes to live

There is no rose but has some thorn (but which not)

There is scarcely a child but likes candy

It will be seen that the pronoun but is here equivalent to who not, which….not.

OMISSION OF THE RELATIVE PRONOUN

Few and short were the prayers we said

A contented mind is the greatest blessing a man can enjoy in the world.

I am monarch of all ^1 survey

Men must reap the things they sow

“That is used preferably with reference to persons. Thus we tend to say the meeting

This tendency to omit the Accusative Relative is more marked in the spoken language. In written language, its omission is often felt to be undignified.

In the following examples from poetry, a Relative Pronoun in the nominative case is omitted:

This distance ^ lends enchantment to the view.

I have a brother who is condemned to die.

Note-The omission of a Relative Pronoun in the nominative case is now quiet except in colloquial speech.

There’s somebody at the door who wants to see you.

OMISSION OF THE ANTECEDENT

In older English, the Antecedent of a Relative Pronoun was sometimes left out; as,

Who works not shall not eat

=(He) who works shall not eat

Whom the gods love, die young

=(Those) whom the gods love die young

Who steals my purse steals trash.

Who has lost all hope has also lost all fear

Be good, sweet maid, and let who will be clever.

AGREEMENT OF THE RELATIVE PRONOUN AND ITS ANTECEDENT

The boy who was lazy was punished

The boys who were lazy were punished

I, who am your king, will lead you.

I am the person that is to blame

who meet your protection are strangers hers

O thou that Madhes Israeli

You who are mighty should be merciful

You who seek wisdom should be humble

They who seek only for faults see nothing else

The flowers which grow in our gardens are not for sale

[ = Of his poems, this is the only one that is worth reading]

But the case of the Relative Pronoun depends upon its relation t the verb in the clause in which it occurs.

Rama is the boy who did it.

Rama, the boy whom I want

Rama is the boy whose pencil I have.

Rama is the boy to whom I spoke.

He whom we worship, by whose gift we live is the Lord.

POSITION OF THE RELATIVE PRONOUN

To prevent ambiguity, the Relative Pronoun should be placed as near as possible to its Antecedent; as,

The boy who won the first prize in English is the son of my friend, Mr. Josh.

The boy is the son of my friend Mr. Joshi who won the first prize

So also, the following sentence requires to be rearranged:

I with my family reside in a village near Pune, which consists of my wife and three children.

Pronouns are formed by adding ever, so, or soever to who, which, and what are called Compound Relative Pronouns. They are: Whoever, whoso, whosoever; whichever: whatever, whatsoever

These Relatives have no antecedent expressed.

Whosoever (=any and every person who) exalteth himself shall be abased.

Whose diggeth a pit shall fail therein

Whatsoever thy hand findeth to do, do it with thy might

The forms whoever whichever and whenever are now ordinarily used as

Whoever (i.e., any person who) comes is welcome

I will take with me whomsoever you choose

Whatever, i.e., anything which he does, he does well.