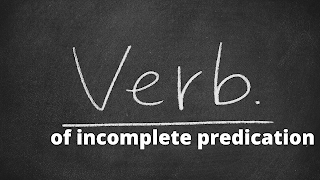 Using a verb of incomplete predication correctly is a vital part of any language skill. But how do you know whether a verb of incomplete predication is correctly used? Perhaps the best way to learn about these verbs is by examining their use in sentences. For example, imagine I ask the following question: “Is the sentence you answered correctly?”
The best way to learn a new grammar topic is to practice it. In this post, let’s work on a new grammatical concept we haven’t covered yet: the verb of incomplete predication.
Read the following sentences:
1. The baby sleeps.
2. The baby seems happy.
The verbs in both above sentences are Intransitive.
But when we say the baby sleeps’ we do make complete sense.
On the other hand, if we say that, “The baby seems” then we do not make complete sense.
The Intransitive Verb seems to require a word (for example, happy) to complete the sense. Ch a verb is called a Verb of Incomplete Prediction.
The word happy, required to make sense complete, is called the Complement of the Verb or the Completion of the Predicate.
Verbs of Incomplete Predication generally express the idea or state of being, becoming seeming, appearing. The Complement usually consists of a Noun (called a Predicative Noun) or the Adjective (called a Predicative Adjective). When the Complement describes the Subject
As in the following sentences, it is called a Subjective Complement.
1. Tabby is a cat.
2. The earth is round
3. John became a soldier.
4. Mr. Mehta became mayor.
5. The man seems tired
6. You look happy
.
7. The sky grew dark 7 Roses smell sweet.
9. Sugar tastes sweet
10. She appears pleased.
11. This house is to let.
Note: When the Subjective Complement is a Noun (as in 1,3,4), it is the same. Cause as the Subject, for example, in the Nominative Cases
some Transitive Verbs requires an object with them as a Complement to complete their predication; as,
The boys made Rama captain.
2. His parents named him Hari
3 This made him vain
4. The jury found him
5 Rama called his cousin a liar
6 Exercise has made his muscles strong
7. I consider the man trustworthy
8 God called the light city 8. We thought him a rascal
10. They chose him their leader
Here, in each case, the Complement describes the Object and is called e Objective Complement.
Note When the Objective Complement is a noun (as in 1, 2, 5, 8, 9, 10), it is in the Objective (or Accusative) Case in agreement with the Object.
In conclusion, I hope you have enjoyed this post on the verb of incomplete predication. I have certainly enjoyed writing it, and I would be interested in your feedback. Please feel free to leave comments on this post and drop by my other posts if you find this interesting.