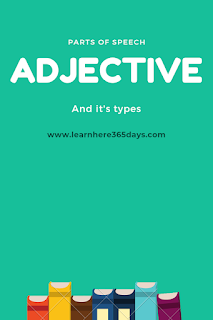 There are thirty boys in this class

So we can say that a word used with a noun or pronoun to describe or point out the person place animal or thing with the noun names or tell number or quantity is called an adjective.

adjective of quantity shows how much of things is mean

He ate some rice

Anwar has lost all his wealth

You should take care of your health

Amjad has no sense

There are seven days in a week

There are several mistakes in this exercise

Generally, the adjective of number answer the questions how much many

There are three types of the adjective of number

This type of adjective defines an exact number.

This type of adjective does not define an exact number

For example, All many any some sundry several no few some

This type of adjective refers to each one of a number

Each girl must take his turn

Each, every, either, either, are an example of a distributive numeral adjective.

Demonstrative adjective generally shows which person or thing is meant as

Ali is stronger than Anwar

That girl is industrious

These grapes are sour

He hates such things

Demonstrative adjective answers the question which?

The type of adjective that is used with a noun to ask questions is called an interrogative adjective.

What which whose whom when is an interrogative adjective.