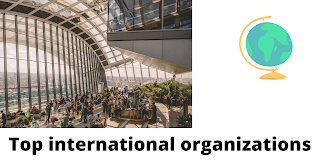 International organizations are enormous employers and play a vital role and have a considerable influence on the lives of individuals around the world.

The United Nations is a unique international organization. Its influence on people’s lives throughout the world has been profound and is also referred to as the “Parliament of Humanity”. This article will describe the role and impact of this critical institution. The U.N. was initially conceived by President Franklin D. Roosevelt (FDR) in 1941 when he declared: “The structure of peace can best be built by a partnership between those prepared for war and those affected by war.

United Nations organization, known as (UNO), was formed in New York on October 24 1945. United Nations headquarters is located in New York F.D Roosevelt was a man who suggested or coined the name of UNO there are a total of 193 members in UNO today. Five members ( China, France, UK, USA, Russia )have veto power. There are 15 members in the security council in UNO, of which ten members are for a temporary period. The provisional member’s security council is elected for two years. United Nations University is in Tokyo, Japan.

some more critical knowledge about UNO is discussed below

U.N. high commissioner for refugees headquarter is in Geneva

U.N. conference on trade and development headquarters is in Geneva

UN Institute for training and research headquarter is in New York

The first secretary-general of UNO was Jefferson

The first Asian secretary-general of the United States was U Thant.

The world health organization (WHO) is the United Nations’ specialized agency responsible for international public health. Its object is ” the attainment by all peoples of the highest possible level of fitness.

WHO was founded on April 7 1948, and its headquarter is in Geneva, Switzerland. There are six regional offices of WHO and 150 field offices worldwide.

The organization of Islamic cooperation is the international organization of Muslim countries. It was founded in 1969 in Rabat, and it headquartered is in Jeddah, Saudi Arabia total of 57 states are official members of OIC. English, Arabic, and French are the official languages of OIC. the first meeting of OIC was held in Rabat and 2nd in Lahore; Pakistan’s current secretary-general is Hussein Ibrahim Taha.

European Union is the political and economic union of Europe’s 27 countries. The European Union was founded on November 1 1993, in Maastricht, Netherlands.

Germany, France, Italy, Netherlands, Belgium, and Luxembourg were the founders, while the European Union’s total area is 4.233 million km square.

South Asian Association for regional cooperation (SAARC) is the economic and political organization of countries that are in South Asia; it was formed on December 8, 1985, in Dhaka, Bangladesh current secretary-general is Esala weerakoon Afghanistan, Bangladesh, Bhutan, India, Maldives,Nepal, Pakistan, and Sri Lanka are the members.

The official language is English.

Asian Pacific economic cooperation is the intergovernmental organization of 21 member states in the Pacific Rim that promotes free trade in the Asia Pacific region. It was founded in November 1989 in Canberra, Australia. Its headquarters is located in Singapore.

North Atlantic treaty organization, formerly known as NATO, is the intergovernmental military alliance between 27 European 1 Eurasian and 2 North American countries. It was founded on April 4, 1949, in Washington DC, USA. Its headquarters is in Brussels, Belgium; English and French is the official language of NATO.

The International Monetary Fund (IMF) is one of the most noticeable global associations and, in this way, on our rundown. It is a 190-country worldwide monetary establishment settled in Washington, D.C., that attempts to advance worldwide money related collaboration, secure economic steadiness, work with the global exchange, high advance business and practical financial development, and lessen poverty all over the planet while depending on the World Bank for assets on an occasional premise. Headquarter Washington, D.C., the United States, founded on December 27, 1945; current Head Chief Economist – Gita Gopinath.

Next on our rundown of worldwide associations is World Bank. The World Bank is a worldwide monetary organization that loans and gives cash to state-run administrations in low-and centre pay countries to finance capital undertakings. The International Bank for Reconstruction and Development (IBRD) and the International Development Association (IDA) are the two foundations that make up the Association (IDA). The World Bank Group comprises the World Bank and its auxiliaries. Headquarters in Washington, D.C., United States, founded in July 1944. Current Head President of WV: David Malpasstop 15 international organizations

The World Trade Organization (WTO) is a multilateral association that manages and supports global exchange. It started procedure on January 1, 1995, because of the 1994 Marrakesh Agreement, which supplanted the 1948-set up General Agreement on Tariffs and Trade (GATT). With 164 part states addressing north of 96% of worldwide exchange and GDP, the World Trade Organization (WTO) is the world’s most extensive global monetary Association. Headquarter Geneva, Switzerland, founded on January 1, 1995, Current Head Roberto Azevêdo.

The Organization for Economic Co-activity and Development (OECD; French: Organization de Coopération et de Développement Économiques, OCDE) is a 38-part intergovernmental financial association shaped in 1961 to advance monetary progression and worldwide exchange. As one of the most noticeable global associations on our rundown, OECD is answerable for business and financial exercises. It discusses nations that distinguish themselves as focused on the majority rules system and the market economy. It fills in as a gathering for individuals to share strategy encounters, find answers for shared difficulties, recognize best practices, and direct their homegrown and worldwide arrangements. Headquarters in Paris, France, was founded on September 30 1961. Current Head Angel Gurría.

The Asian Infrastructure Investment Bank (AIIB) is a worldwide improvement bank devoted to further developing Asia’s monetary and social conditions. At present, the bank has 103 individuals and 21 forthcoming individuals from one side of the planet to the other. The bank started tasks after the arrangement came full circle on December 25, 2015, with endorsements from ten-part states representing 50% of the Authorized Capital Stock beginning memberships. Headquarters in Beijing, China, founded in January 2016 (started activities). Current Head Jin Liqun

The New Development Bank (NDB), initially known as the BRICS Development Bank, is a worldwide advancement bank established by the BRICS nations (Brazil, Russia, India, China, and South Africa). “The Bank will uphold public or private drives through credits, ensures, value investment, and other monetary instruments,” per the NDB Agreement. Headquarter Shanghai, China, founded on July 15, 2014, Current Head K. V. Kamath Asian Development Bank (ADB) Next on our rundown of global associations is ADB. The Asian Development Bank (ADB) is a territorial improvement bank settled in the Ortigas Center in Mandaluyong, Metro Manila, Philippines. It was established on December 19, 1966. Moreover, the organization works in 31 field workplaces all over the planet to advance Asia’s social and financial turn of events. Headquarter Manila, Philippines, founded on December 19, 1966, Current Head Masatsugu Asakawa.

Keep going on. Our rundown of worldwide associations is WWF. The World Wide Fund for Nature (WWF) is a worldwide non-legislative association that tries to protect the wild and lessen the human consequences on the climate. It was founded in 1961. The World Wildlife Fund was its last name, and it is as yet utilized in Canada and the United States. With more than 5,000,000 allies universally, WWF is the world’s most prominent preservation association, working in the north of 100 nations and supporting around 3,000 protection and natural tasks. Headquarters Gland, Switzerland, was founded on April 29 1961. Current Head Carter Roberts.